Eddy Alvarez started his speedskating career by in-line skating at five years old. He has won multiple national championships throughout his career. Due to serious tearing of both patellar tendons, Eddy underwent Bilateral Debridement Patellar Repair on March 27th, 2012. Less than six months after, in September 2012, he placed 7th in the U.S. Team Trials, and in December 2012, Eddy placed 3rd in the U.S. Championships in Salt Lake City, Utah, which placed him on the Winter World Cup and World Championship teams. He competed in the Samsung ISU Short Track World Cup in Sochi, Russia on February 2nd, 2013, and led the U.S. team to a second place finish in the 500 meter. More recently, he competed in World Cups 1-4 in September through November 2013 and helped Team USA finish second overall. Eddy is currently training and living in Salt Lake City, Utah in preparation for the U.S. Speedskating Olympic Trials to be held on January 2, 2014. 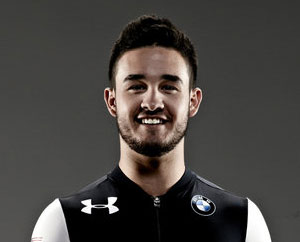 Born and raised in Miami, Florida, Eddy is a second generation Cuban-American, and is bilingual, speaking fluently in English and Spanish. Alongside speedskating, he was an avid baseball player while growing up. During his time off, Eddy enjoys going to Key Largo, Florida and spending time with his family. Eddy enjoys all things Latin. From the savory foods to the lively music and dancing; Eddy is an upbeat, family-loving guy.